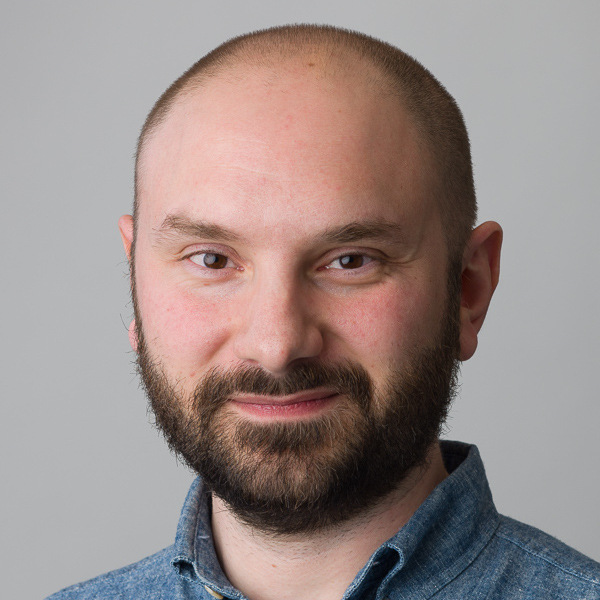 I am Enrico Glerean, I am a staff scientist at the Aalto School of Science, core member of the Aalto Scientific Computing team where we run the Triton high performance computing cluster, help researchers with their research software, and teach massive online hands-on courses like “Python for Scientific Computing”. I am an expert in working with personal data in research: I train and support researchers with issue related to GDPR, secure computing workflows for sensitive data, data anonymization.

My research domain is cognitive neuroscience, with focus on methods for magnetic resonance imaging of the brain.

I am a passionate promoter of open science, transparency, ethics, research integrity, and reproducibility: I train other researchers on these issues and I am a founding member of the Finnish Reproducibility Network. I am a core member of the Aalto Data Agents network. I am a member of Nordic-RSE and CodeRefinery, two communities in the Nordics devoted to training and helping researchers with scientific software and reproducibility. I am an activist trying to bring a change on issues about equality and inclusivity for women in STEM: I am one of the organizers of the “Making Waves” initiative. 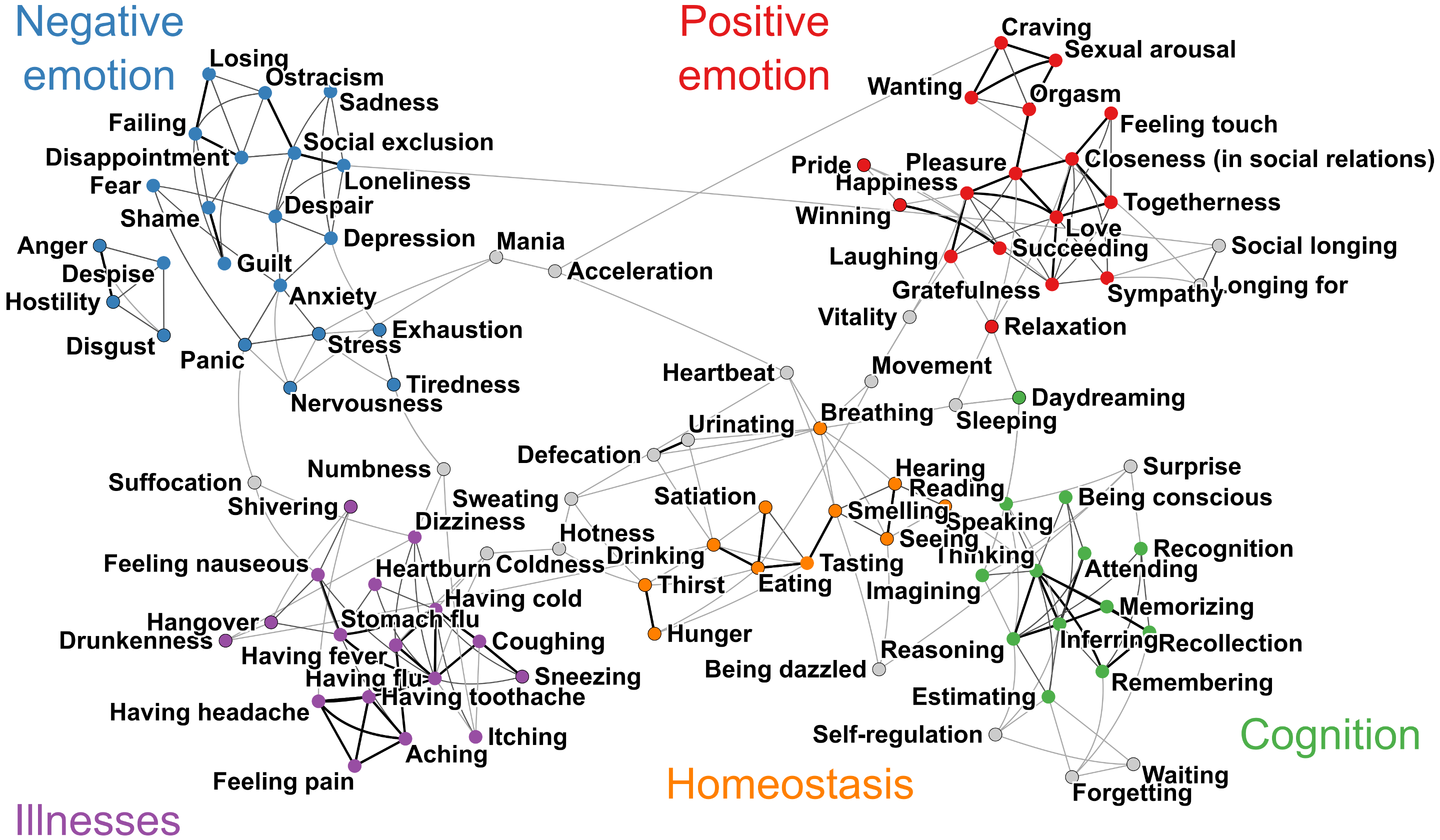 My main research interests orbit around these three keywords: Brain, Networks, Behaviour. These three elements and their multiple combinations are present in all my peer reviewed studies.

Most of my research focuses on the human brain. As the brain is a network, I have developed extensive knowledge in brain networks from the level of neurons up to the large scale interactions between brain regions. I am particularly interested in subcortical areas and their role in cognition and psychiatric disorders. I also study the interaction between individuals using quantitative approaches, by modelling how more brains synchronise with each other with methods such as Intersubject Synchronisation and Intersubject Dynamic Functional Connectivity. I work with Magnetic Resonance Imaging (fMRI, sMRI, dMRI, MRA), Positron Emission Tomography (mu-opiod receptors, serotonin receptors and transporters, dopamine receptors), and sometimes also with electrophysiology (MEG, EEG). I also have a passion for meta-analysis and web-based tools to study and discover the vastness of brain imaging data. Finally, I am a strong supporter of measuring the brain during life-like naturalistic experiments, by using videos, audio narratives, and music. My previous research has greatly contributed to the field of naturalistic neuroscience both with stimulus modelling as well as brain data analysis. 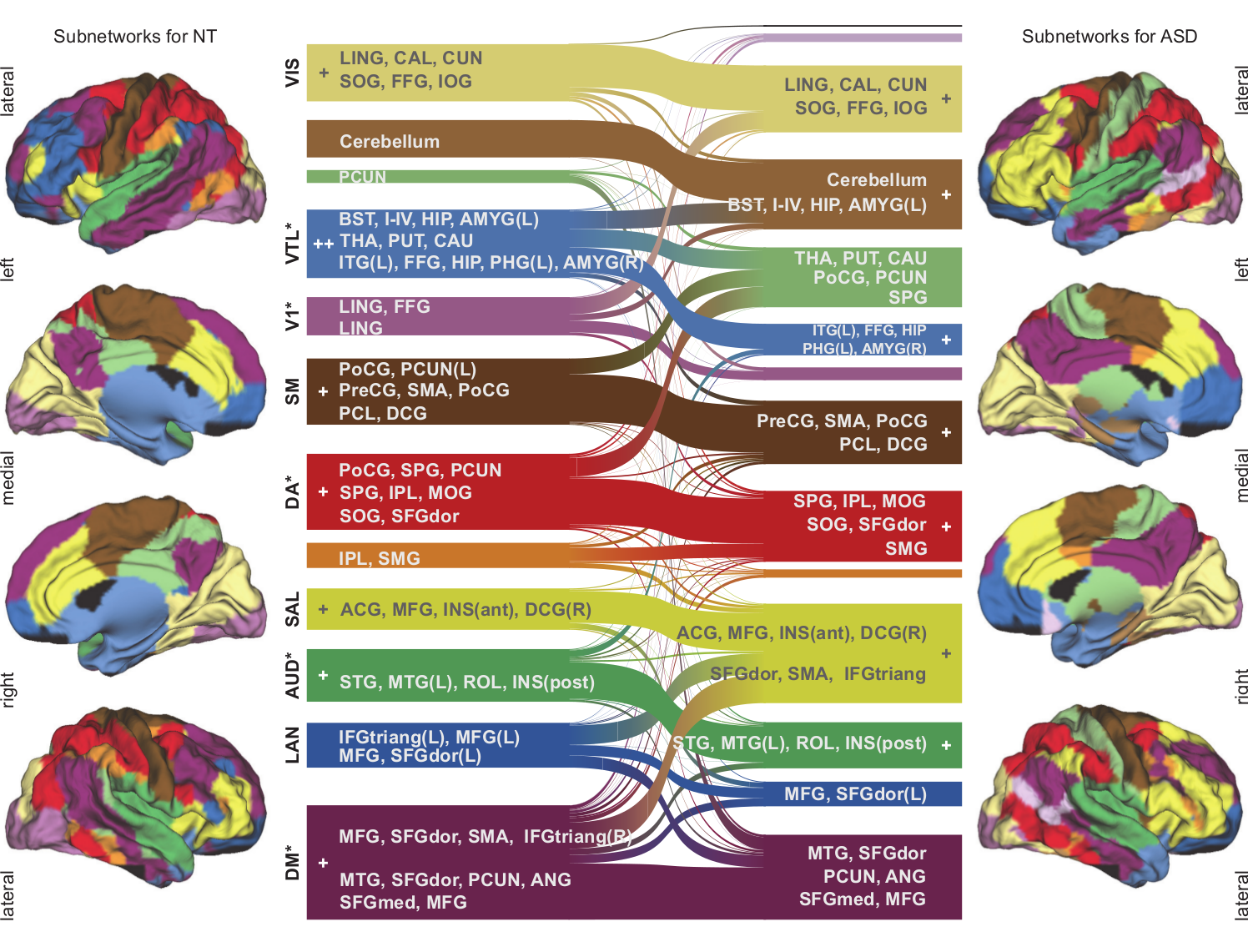 Functional subnetworks and their reorganization between typical controls (NT) and high functioning individuals with Autism Spectrum Disorder (ASD). Functional subnetwork similarities and differences between NT (left) and ASD (right) subjects. The subnetworks are color-coded and projected on lateral and medial surfaces of both hemispheres. The alluvial diagram in the middle uses the same color-coding. The height of each ribbon representing a subnetwork corresponds to the number of nodes that belong to the given subnetwork. Full figure caption here.

Networks are ubiquitous. Furthermore, networks (graphs) are a powerful mathematical tool to model knowledge, social interaction, mental disorders and biological networks like the brain. I am specifically interested in multi-layer networks and how graph modelling of each layer can act as a bridge between phenotype, behaviour and brain-based measurement. Network science is also a powerful tool to identify clusters and subtypes, which is important in mental healthcare as current psychiatric diagnoses are often too broad umbrella terms for different types of conditions. I work on network modelling with a holistic data-driven approaches (such as proposed by RDoC) to better understand clinical populations. 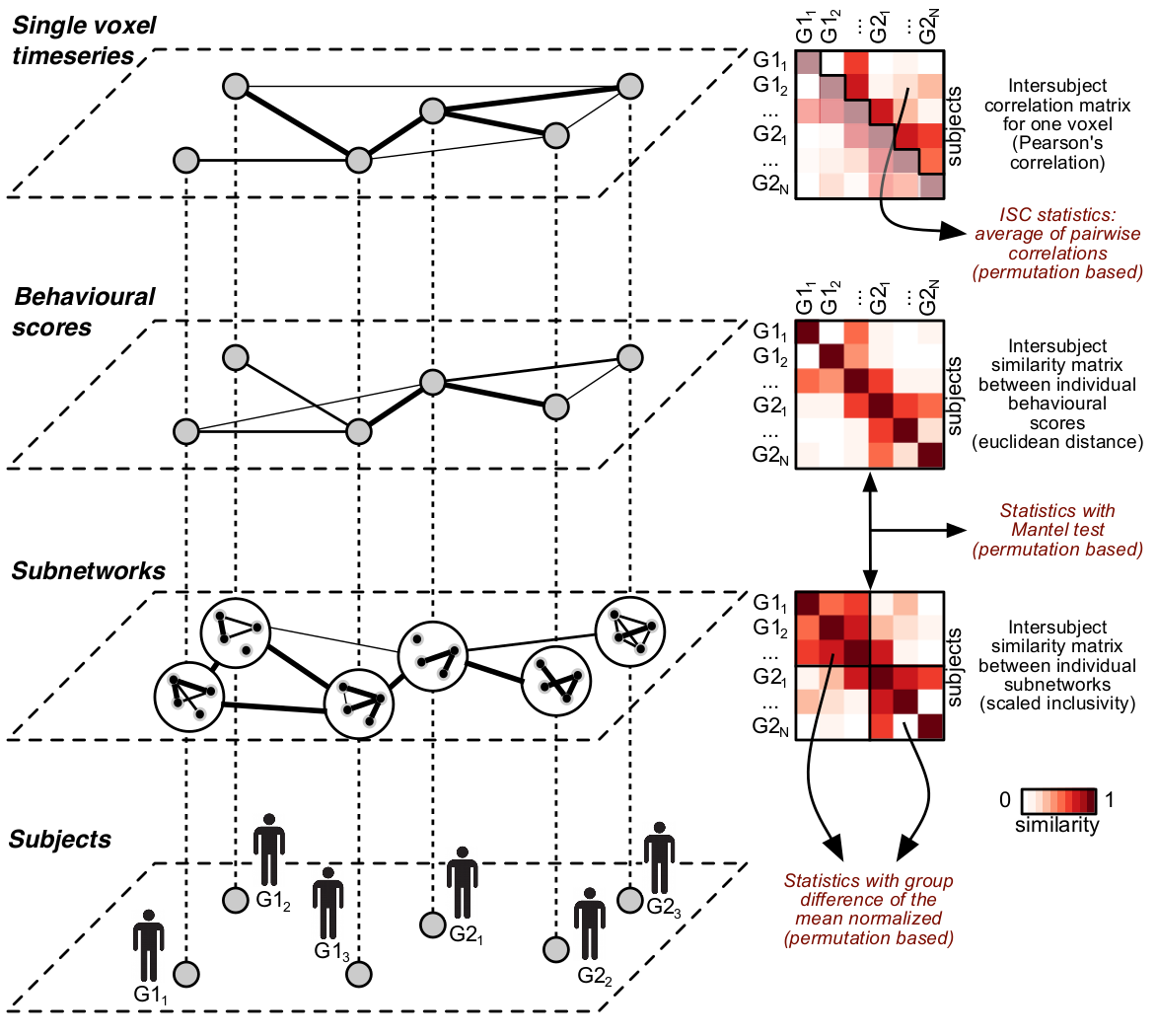 A schematic representation of the intersubject analysis framework. For two groups of subjects (bottom layer, groups G1 and G2), we can compute the similarity between each subject pair by using functional brain data at the level of a single voxel (“Single voxel time-series” layer), using behavioral scores (“Behavioral scores” layer) or using more complex modeling methods (e.g. similarity at the level of subnetworks). These similarity layers are depicted as networks and as adjacency matrices also known, in this case, as intersubject similarity matrices. Three types of statistical tests can then be run (marked in dark red in the figure): a group difference within a layer, in which the within groups values of the adjacency matrix are compared (bottom adjacency matrix, where the group comparison tests whether the within G1 group similarity is higher than the within G2 group similarity). The second test is the Mantel test, in which two similarity matrices are compared with each other by correlating the corresponding values of the top off-diagonal triangle. In the latter case, also the between group similarity values are used making the Mantel approach more strict. The third test is the whole-group intersubject correlation, as the significant level of average pairwise similarity for a single voxel time-series as implemented by the ISC toolbox.

Studying the brain without behaviour is like trying to understand a car without ever driving it. Behaviour is the most fascinating of the three concepts I am interested in, as it is at the core of us as human beings, alone or during interactions with others. I am interested in quantifying behaviour in life-like situations, possibly outside the lab or by using naturalistic stimuli (videos, audio narratives, music). Specifically, I am interested in emotions and the role of the body in our mental perception. I am also interested in quantifying behaviour with clinical populations, to design tools to aid individuals and their therapists in understanding behaviour using web-based and smartphone-based technologies. I have developed tools for self-reporting complex body responses due to emotions or other psycho-physiological processes. I have developed web tools for massive online data collection. I am also interested how individuals synchronise with each other using dynamic behavioural and physiological measures. 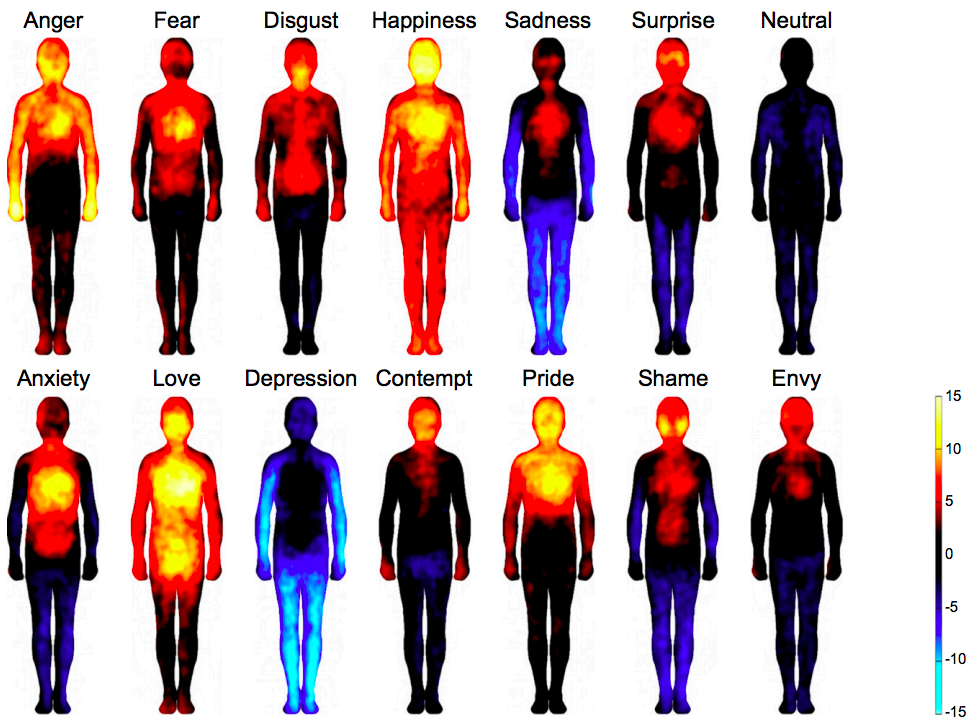 I was born in 1977 in Italy in a town close to Venice. I graduated in Telecommunication Engineering (University of Padua, 2002) and worked as a research assistant (2003-2004); research topic: patterns in time-series of internet traffic. In 2004 I left academia and moved to London to work for the IT industry until end 2007. I went back to academia studying for a second master degree in music cognition: Music, Mind & Technology (University of Jyväskylä). This led me to a research position as part of the aivoAALTO research team which ended up in 2015 with me completing a PhD (Doctor of Technology) with distinction at Aalto University School of Science (former Helsinki University of Technology) combining fMRI and complex networks methods to understand brain functions. I was a post doctoral researcher at Lauri Nummenmaa’s Human Emotion Systems Lab at University of Turku, and at the Complex Systems group at Aalto University. To read what I am up to these days, see section at the top of this page.

In my free time I enjoy travelling, swimming, cycling, making music, and playing with my two children (born 2014 & 2016).